Advanced manufacturing technology is now widely used in industrial production because it can make production more convenient and efficient.

Computer-aided production and control system is an indispensable item in advanced manufacturing technology.

Automation is generally defined as the process of having machines follow a predetermined sequence of operations with little or no human labor, using specialized equipment and devices that perform and control manufacturing processes. Automation is an evolutionary rather than a revolutionary concept. In manufacturing plants it has been implemented successfully in the following basic areas of activity.

Machining, forging, cold extrusion, casting, and grinding operations are typical examples of processes that have been extensively automated.

Material and parts in various stages of completion are moved through a plant by computer-controlled equipment, without human guidance.

Individually manufactured parts are automatically assembled into subassemblies and, finally, into a product.

Automation has the following primary goals.

1) To integrate various aspects of manufacturing operations so as to improve product quality and uniformity, minimize cycle times and effort and , thus, reduce labor costs.

4)To reduce human involvement, boredom, and the possibility of human error.

6)To raise the level of safety for personnel, especially under hazardous working conditions.

7)To economize on floor space in the manufacturing plant by arranging machines, material movement, and auxiliary equipment more efficiently. 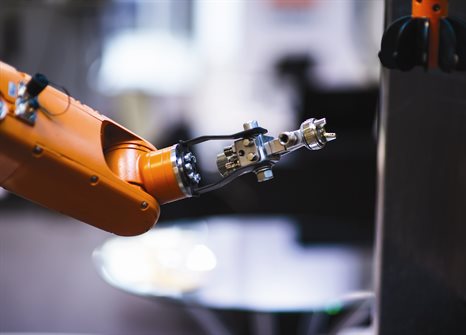 The computer has had a major impact on the way everyday tasks associated with design are accomplished. It can be used in many ways to do many things. However, all design tasks accomplished using a computer fall into one of four broad categories:

1) Numerical control (NC) is a method of controlling the movements of machine components by directly imputing coded instruction, in the form of numbers and letters, into the system. The system automatically interprets there data and converts them to output signals, in turn, control various machine components. For example, by turning spindles on and off, changing tools, moving the work piece or the tools along specific paths, or turning cutting fluids on and off.

In order to appreciate the importance of numerical control of machines, let's briefly review how a process such as machining has traditionally been carried out. After studying the working drawings of a part, the operator sets up the appropriate process parameters (such as cutting speed, feed, depth of cut cutting fluid, and so on), determines the sequence of the machining operations to be performed, clamps the work piece in a work holding device (such as a chuck or collet), and proceeds with the making of the part.

Depending on part shape and on the dimensional accuracy specified, this approach usually requires skilled operators. The machining procedure followed may depend on the particular operator; because of the possibilities of human error, even parts produced by the same operator may not all be identical.

Part quality may, therefore, depend on the particular operator or (even with the same operator) on the day of the week or the hour of the day. Because of increased concern with improving product quality and reducing manufacturing costs, such variability (and its effects on product quality) are no longer acceptable. This situation can be eliminated by numerical control of the machining operation.

2) In direct numerical control (DNC), as originally conceived and developed in the 1960s, several machines are directly control, step by step, by a central mainframe computer. In this system, the operator has access to the central computer through a remote terminal. In this way, the handing of tapes and the need for a separate computer on each machine are eliminated. With DNC, the status of all machines in a manufacturing facility can be monitored and assessed from the central computer. However, DNC has a crucial disadvantage: If the computer shuts down, all the machines become inoperative.

A more recent definition of DNC (now meaning distributed numerical control) covers the use of a central computer serving as the control system over a number of individual computer numerical control machines having onboard microcomputers. This system provides large memory and computational capabilities and offers flexibility while overcoming the disadvantage of direct numerical control.

Computer numerical control(CNC)  is a system in which a controlmicrocomputter is an integral part of a machine or a piece of equipment(onboard computer). The part program may be prepared at a remote site by theprogrammer, and it may incorporate information obtained from draftingsoftware packages and from machining simulations, in order to ensure that thepart program is bug free. The machine operator can, however, easily andmanually program onboard computers. The operator can modify the programsdirectly, prepare programs for different parts, and store the

Because of the availability of small computers having a large memory, microprocessors and program-editing capabilities.  CNC systems are widely used today. The availability of low-cost programmable controllers also played a major role in the successful implementation of CNC in manufacturing plants.

To understand CIM, it is necessary to begin with a comparison of modern and traditional manufacturing. Modern manufacturing encompasses all of the activities and  processes necessary to convert raw materials into finished products, deliver them to the market, and support them in the field. These activities include the following:

(1) Identifying a need for a product.

(2) Designing a product to meet the needs.

(3) Obtaining the raw materials need to produce the product.

(5) Transporting products to the market.

(6) Maintaining the product to ensure proper performance in the field.

This broad, modern view of manufacturing can be compared with the more limited traditional view that focused almost entirely on the conversion processes. The old approach excluded such critical pre-conversion elements as market analysis research, development, and design, as well as such after-conversion elements as product delivery and product maintenance." In other words, in the old approach to manufacturing, only those processes that took place on the shop floor were considered manufacturing. This traditional approach of separating the overall concept into numerous stand-alone specialized elements was not fundamentally changed with the advent of automation.

5. The advantages of advanced manufacturing technology

To understand the limitations of automation with regard to overall productivity improvement, 1 consider the following analogy. 1 Suppose that various subsystems of an automobile (i.e., the engine, steering, brakes) were automated to make the driver's job easier. Automatic acceleration, deceleration, steering, and braking would certainly be more efficient than the manual versions. However, consider what would happen if these various automated subsystems were not tied together in a way that allowed them to communicate and share accurate, up-to-date information instantly and continually. One system might be attempting to accelerate the automobile while another system was attempting to apply the brakes. The same limitations apply in an automated manufacturing setting. These limitations are what led to the current stage in the development of manufacturing, integration.

Another way to view the historical development of CIM is by examining the ways in which some of the individual components of CIM have developed over the years, Such components as design, planning, and production have evolved both in processes and in the tools and equipment used to accomplish the processes.