Milling is the most common form of machining, a material removal process, which can create a variety of features on a part by cutting away the unwanted material. The milling process requires a milling machine, workpiece, fixture, and cutter. The workpiece is a piece of pre-shaped material that is secured to the fixture, which itself is attached to a platform inside the milling machine. The cutter is a cutting tool with sharp teeth that is also secured in the milling machine and rotates at high speeds. By feeding the workpiece into the rotating cutter, material is cut away from this workpiece in the form of small chips to create the desired shape.

What is CNC Milling?

CNC is an acronym that stands for Computer Numerical Control. It is a term that is used in reference to either the automated specialized machinery (sometimes called machining centers) that can remove material from a stock piece (also called a workpiece or blank) or to the service that performs those machining operations.


CNC milling, or computer numerical control milling, is a machining process, which employs computerized controls and rotating multipoint cutting tools to progressively remove material from the workpiece and produce a custom-designed part or product. This process is suitable for machining a wide range of materials, such as metal, plastic, glass, and wood, and producing a variety of custom-designed parts and products. 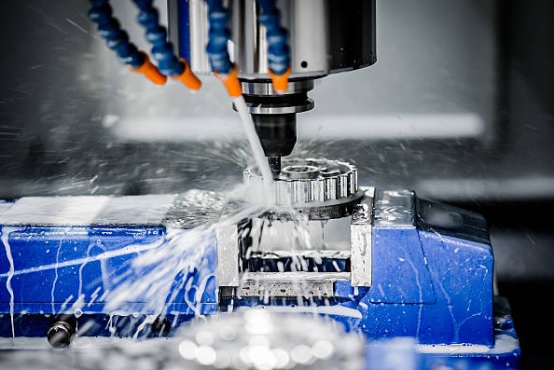 Several capabilities are offered under the umbrella of precision CNC machining services, including mechanical, chemical, electrical, and thermal processes. CNC milling is a mechanical machining process along with drilling, turning, and a variety of other machining processes, meaning that material is removed from the workpiece via mechanical means, such as the actions of the milling machine’s cutting tools.

The biggest feature of the CNC milling machine is high-flexible and universal. can process different shapes of workpiece. It can finish drilling, boring, hole checking, plane milling, bevel milling, groove milling, curved surface (CAM) milling, thread tapping, and other processing on CNC milling machine. In general, the required processing procedure can be completed by clamping once.

At present, the pulse equivalent of the numerical control device is usually 0.001 mm, and the high-precision numerical control system can reach 0.1 μm, which can ensure the workpiece accuracy in general. In addition, the CNC machining can also avoid the operator's operation error, and the size of the same batch of machining parts is good, which greatly improves the product quality. Because the CNC milling machine has high machining accuracy, it can process many complex surfaces that are difficult to be processed by ordinary machine tools or cannot be processed at all, so it has more advantages in processing various complex molds.

An end mill makes either peripheral or slot cuts, determined by the step-over distance, across the workpiece in order to machine a specified feature, such as a profile, slot, pocket, or even a complex surface contour. The depth of the feature may be machined in a single pass or may be reached by machining at a smaller axial depth of cut and making multiple passes. 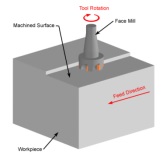 A chamfer end mill makes a peripheral cut along an edge of the workpiece or a feature to create an angled surface, known as a chamfer. This chamfer, typically with a 45 degree angle, can be machined on either the exterior or interior of a part and can follow either a straight or curved path. 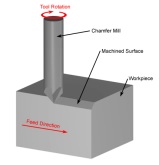 Face milling is the milling of surfaces that are perpendicular to the cutter axis. Face milling produces flat surfaces and machines work to the required length. In face milling, the feed can be either horizontal or vertical.

In face milling, the teeth on the periphery of the cutter do practically all of the cutting. However, when the cutter is properly ground, the face teeth actually remove a small amount of stock which is left as a result of the springing of the workpiece or cutter, thereby producing a finer finish.

A face mill machines a flat surface of the workpiece in order to provide a smooth finish. The depth of the face, typically very small, may be machined in a single pass or may be reached by machining at a smaller axial depth of cut and making multiple passes. 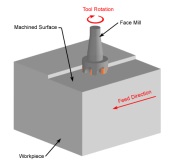 The milling machine may be used effectively for drilling, since the accurate location of the hole may be secured by means of the feed screw graduations. Spacing holes in a circular path, such as the holes in an index plate, may be accomplished by indexing with the index head positioned vertically. 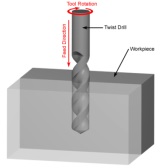 Various types of boring tool holders may be used for boring on the milling machine. the boring tools being provided with either straight shanks to be held in chucks and holders or taper shanks to fit collets and adapters. The two attachments most commonly used for boring are the fly cutter arbor and the offset boring head.

The single-edge cutting tool used for boring on the milling machine is the same as a lathe cutter bit. Cutting speeds, feeds, and depth of cut should be the same as that prescribed for lathe operations.

A boring tool enters the workpiece axially and cuts along an internal surface to form different features. The boring tool is a single-point cutting tool, which can be set to cut the desired diameter by using an adjustable boring head. Boring is commonly performed after drilling a hole in order to enlarge the diameter or obtain more precise dimensions. 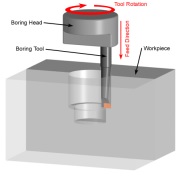 An counterbore tool enters the workpiece axially and enlarges the top portion of an existing hole to the diameter of the tool. Counterboring is often performed after drilling to provide space for the head of a fastener, such as a bolt, to sit below the surface of a part. The counterboring tool has a pilot on the end to guide it straight into the existing hole.

A countersink tool enters the workpiece axially and enlarges the top portion of an existing hole to a cone-shaped opening. Countersinking is often performed after drilling to provide space for the head of a fastener, such as a screw, to sit flush with the workpiece surface. Common included angles for a countersink include 60, 82, 90, 100, 118, and 120 degrees. 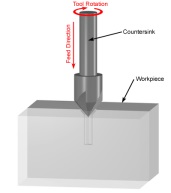 A reamer enters the workpiece axially and enlarges an existing hole to the diameter of the tool. Reaming removes a minimal amount of material and is often performed after drilling to obtain both a more accurate diameter and a smoother internal finish. 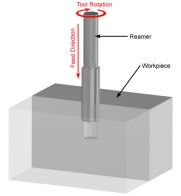 A tap enters the workpiece axially and cuts internal threads into an existing hole. The existing hole is typically drilled by the required tap drill size that will accommodate the desired tap. Threads may be cut to a specified depth inside the hole (bottom tap) or the complete depth of a through hole (through tap). 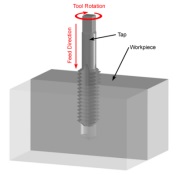 The plain milling, also known as slab milling, is the most common types of milling machine operations, which is performed to produce a plain, flat, horizontal surface parallel to the axis of rotation of a plain milling cutter.


To perform the operation, the work and the cutter are secured properly on the machine. The depth of cut is set by rotating the vertical feed screw of the table. And the machine is started after selecting the right speed and feed. 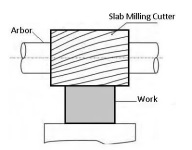 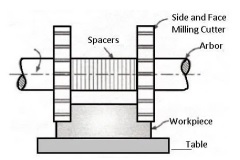 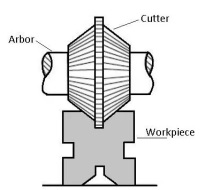 The gang milling is the operation of machining several surfaces of a workpiece simultaneously by feeding the table against a number of cutters having the same or different diameters mounted on the arbor of the machine. The method saves much of machining time and is widely used in repetitive work. Cutting speed of a gang of cutters is calculated from the cutter of the largest diameter. 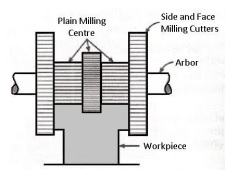 The form milling is the operation of producing the irregular contour by using form cutters. The irregular shape may be convex, concave, or of any other shape. After machining, the formed surface is inspected by a template gauge. Cutting rate for form milling is 20% to 30% less than that of the plain milling. 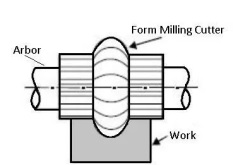