Up Milling and Down Milling

Milling is one type of conventional machining process primarily for generating flat or stepped surfaces. In peripheral milling, cutting velocity is imparted by rotating the milling cutter about a fixed horizontal axis; whereas, the feed rate is imparted by moving the workpiece (basically worktable) against the rotating milling cutter. Since both cutting velocity and feed rate are vector quantities, so based on their mutual directions, peripheral milling can be classified into two groups—up milling and down milling. Each of them has specific advantages and disadvantages. We will discuss up milling, down milling, and similarities and differences between them.

What is Up Milling?

What is Down Milling?

Similarities and Differences between Up Milling and Down Milling 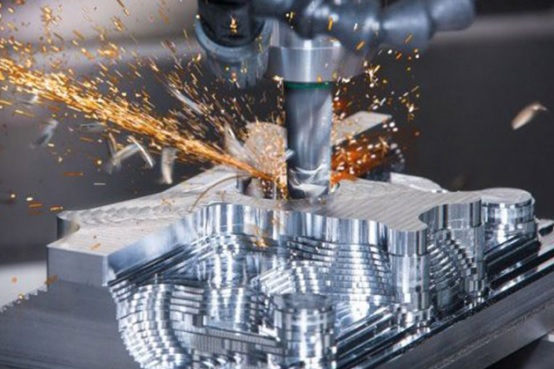 The up milling, which is also called conventional milling or climb up milling, is the process of removing metal by a cutter which is rotated against the direction of travel of the workpiece. 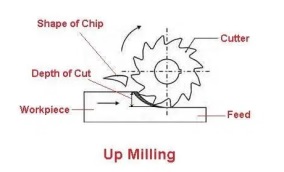 The chip thickness starts at zero and increases toward the end of the cut. The cutting edge has to be forced into the cut, creating a rubbing or burnishing effect due to friction, high temperatures， and oftentimes, contact with a work-hardened surface caused by the preceding edge. All this reduces the tool life. The thick chips and higher temperature at the exit from cut will cause high tensile stresses that will reduce tool life and often result in rapid edge failure. It can also cause chips to stick or weld to the cutting edge, which will then carry them around to the start of the next cut, or cause momentary edge frittering.

2. What is Down Milling? 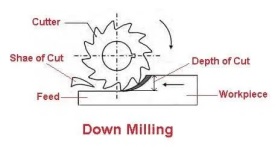 This results in improved surface finish and diminishes the heat generated. The down milling operation having so many advantages cannot be used on old machines due to the backlash error that may be present between the feed screw of the table and the nut. The backlash error causes the work to be pulled below the cutter when the cut begins and leaves the work free when the cut is terminated. The sea action is repeated as soon as the next tooth engages the work.

3. Similarities and Differences between Up Milling and Down Milling

1. Three process parameters (speed, feed, and depth of cut) must be provided for machining

2. The same milling cutter can be applied for both the cases, but the orientation may be different.

3. In the case of full immersion end-milling operation (slot cutting), both up-milling and down-milling occur one after another in every rotation for each tooth.

5. In both cases, the maximum chip load is proportional to the given feed per tooth.