How to Choose Down Milling and Up Milling When Processing Parts?

In the process of using CNC machine tools, how to make the right choice for down milling and up milling?

How to define down milling and up milling? 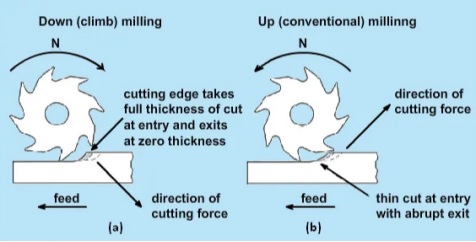 Features of down milling and up milling

The vertical cutting component force acting on the workpiece during up milling is always upward, which tends to lift the workpiece, which is easy to cause vibration and affect the clamping of the workpiece. This situation is particularly prominent when milling thin-walled and poorly rigid workpieces.

When an end mill is used to down-mill the contour of a workpiece, the reaction force of the workpiece on the tool points to the direction of the tool, and the elastic deformation of the tool causes the tool to "give the tool" (undercut) phenomenon.

When an end mill is used to up-mill the contour of a workpiece, the reaction force of the workpiece on the tool points to the inside of the contour, and the elastic deformation of the tool causes the tool to "gnaw" (overcut). The smaller the diameter of the tool and the longer the shank is, the more obvious the phenomenon of "letting the knife" and "biting the knife". 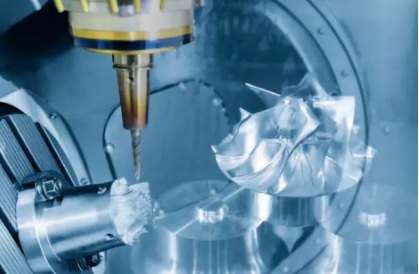 The vertical milling component force of down milling presses the workpiece to the worktable, the cutter teeth slide with the machined surface, and the friction is small, which is beneficial to reduce the wear of the cutter teeth, reduce the work hardening phenomenon and reduce the surface roughness.

However, during down milling, the distance that the cutter travels on the workpiece is shorter than that of up milling, and the average cutting thickness is larger. Therefore, under the same cutting conditions, when up-milling is used, the tool is easy to wear and consumes more cutting power.

How to choose down milling and up milling?

When using down milling, the machine tool is first required to have a gap elimination mechanism, which can reliably eliminate the gap between the feed screw and the nut of the worktable to prevent vibration during the milling process. 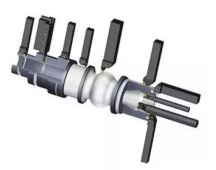 It is ideal if the worktable is driven by hydraulic pressure. Secondly, it is required that there is no hard skin on the surface of the workpiece blank, and the process system must have sufficient rigidity. If the above conditions can be met, down milling should be used as much as possible, especially for milling difficult-to-machine materials. Down milling can reduce cutting deformation, cutting force and cutting power.

When the disk milling cutter is used to process the plane profile, when the cutting width of the tool is greater than 50% of the tool diameter, there are both down milling and up milling in the cutting process.

3. Choice of Down Milling and Up Milling on CNC Milling Machine

CNC machine tools generally have an anti-backlash function, the backlash of the transmission mechanism is small, and most of the CNC machine tools perform parts finishing. Therefore, down-milling is usually used in CNC milling, that is, the tool radius left compensation is used for programming and processing during contour processing.