What is a milling machine?

A milling machine is a device that rotates a circular tool that has a number of cutting edges symmetrically arranged about its axis. the workpiece is commonly held in a vise or similar device clamped to a table that can move in three perpendicular directions. Disk- or barrel-shaped cutters are clamped through holes in their centers to arbors (shafts) attached to the machine spindle; they have teeth on their peripheries only or on both peripheries and faces. An end mill is a cutter shaped like a pencil with a tapered shank that fits into the machine spindle; it has cutting teeth on its face and spiral blades on the lateral surface.

Milling machines can be found in a variety of sizes and designs, yet they still possess the same main components that enable the workpiece to be moved in three directions relative to the tool. These components include the following:

It is a rectangular casting which is present on the top of the saddle.
*It is used to hold the work or work holding devices.
*It contains several T-slots for holding the work and work holding devices (i.e. jigs and fixtures).
*The table can be operated by hand or by power. To move the table by hand, engage and turn the longitudinal hand crank. To move it through power, engage the longitudinal direction feed control lever.

Saddle
The saddle is the platform that supports the table and allows its longitudinal motion. The saddle is also able to move and provides the horizontal motion of the workpiece in the Y-direction by sliding transversely along another platform called the knee.

Knee
It is a casting that supports the saddle and table. All gearing mechanism is enclosed within the knee.
*It is fastened to the column by dovetail ways.
*The knee is supported and adjusted by a vertical positioning screw (elevating screw).
*The elevating screw is used to adjust the knee up and down by raising or lowering the lever either with the help of hand or power feed.

What is milling machine's origin and development?

Whitney produced the machine, along with several others, with an eye toward originating mass production of gun parts. In 1798 he contracted with the federal government to produce a large order of muskets. All guns, at the time, were hand-crafted, and so gun parts were not interchangeable. Whitney remedied this with his construction of a semi-automated, machine tool factory. 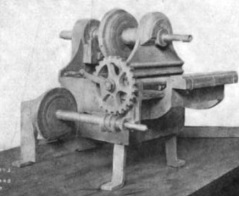 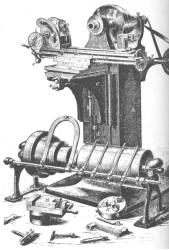 
In 1867, American engineer Joseph R. Brown (1805-1870) introduced his universal milling machine at the Paris Exhibition. Brown’s machine arose following the testing in 1861 of one designed to solve the problem of producing spiral flutes for twist drills. This machine proved amazingly versatile, and led to Brown’s significant addition in 1864 of a formed cutter. Ever since, milling machines have vied with lathes as the most employed industrial machine tool. Their high adaptability is demonstrated by the numerous cutting jobs they perform, including flat surfaces, grooves, shoulders, inclined surfaces, slots, and dovetails.

The types of milling machine

There are three main types of milling machines: 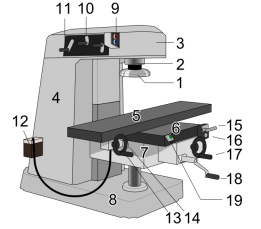 A turret mill has a stationary spindle and the table is moved both perpendicular and parallel to the spindle axis to accomplish cutting. The most common example of this type is the Bridgeport, described below. Turret mills often have a quill which allows the milling cutter to be raised and lowered in a manner similar to a drill press. This type of machine provides two methods of cutting in the vertical (Z) direction: by raising or lowering the quill, and by moving the knee.
In the bed mill, however, the table moves only perpendicular to the spindle's axis, while the spindle itself moves parallel to its own axis.

Turret mills are generally considered by some to be more versatile of the two designs. However, turret mills are only practical as long as the machine remains relatively small. As machine size increases, moving the knee up and down requires considerable effort and it also becomes difficult to reach the quill feed handle (if equipped). Therefore, larger milling machines are usually of the bed type.

A third type also exists, a lighter machine, called a mill-drill, which is a close relative of the vertical mill and quite popular with hobbyists. A mill-drill is similar in basic configuration to a small drill press, but equipped with an X-Y table. They also typically use more powerful motors than a comparably sized drill press, with potentiometer-controlled speed and generally have more heavy-duty spindle bearings than a drill press to deal with the lateral loading on the spindle that is created by a milling operation. A mill drill also typically raises and lowers the entire head, including motor, often on a dovetailed vertical, where a drill press motor remains stationary, while the arbor raises and lowers within a driving collar. Other differences that separate a mill-drill from a drill press may be a fine-tuning adjustment for the Z-axis, a more precise depth stop, the capability to lock the X, Y or Z axis, and often a system of tilting the head or the entire vertical column and powerhead assembly to allow angled cutting. Aside from size and precision, the principal difference between these hobby-type machines and larger true vertical mills is that the X-Y table is at a fixed elevation; the Z-axis is controlled in basically the same fashion as drill press, where a larger vertical or knee mill has a vertically fixed milling head, and changes the X-Y table elevation. As well, a mill-drill often uses a standard drill press-type Jacob's chuck, rather than an internally tapered arbor that accepts collets. These are frequently of lower quality than other types of machines, but still fill the hobby role well because they tend to be benchtop machines with small footprints and modest price tags. 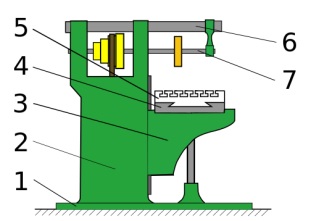 A horizontal mill has the same sort but the cutters are mounted on a horizontal spindle (see Arbor milling) across the table. Many horizontal mills also feature a built-in rotary table that allows milling at various angles; this feature is called a universal table. While endmills and the other types of tools available to a vertical mill may be used in a horizontal mill, their real advantage lies in arbor-mounted cutters, called side and face mills, which have a cross section rather like a circular saw, but are generally wider and smaller in diameter. Because the cutters have good support from the arbor and have a larger cross-sectional area than an end mill, quite heavy cuts can be taken enabling rapid material removal rates. These are used to mill grooves and slots. Plain mills are used to shape flat surfaces. Several cutters may be ganged together on the arbor to mill a complex shape of slots and planes. Special cutters can also cut grooves, bevels, radii, or indeed any section desired. These specialty cutters tend to be expensive. Simplex mills have one spindle, and duplex mills have two. It is also easier to cut gears on a horizontal mill. Some horizontal milling machines are equipped with a power-take-off provision on the table. This allows the table feed to be synchronized to a rotary fixture, enabling the milling of spiral features such as hypoid gears.

It is the same as the horizontal mill machine, except there is an arrangement of swing up the table to 45 degrees in either direction. 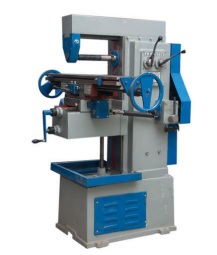 The machine design is as follows: all the main machine units are located on the base; gearbox and spindle unit are mounted inside the base. A knee supporting the gearbox moves along vertical guide of the base, rotary device with a fixed rotary table moves crosswise along the knee guides on the slides. The machine rotary device allows turning the table around 90° vertical axis. As a result, the table can move in horizontal direction around different angles aslant to the spindle axis. Rotation torque is conveyed from the engine to the spindle through the gearbox, where different types of milling cutters are fixed using a special holder, for treatment of parts surfaces.

A universal milling machine is capable of a wider range of motion than a typical milling machine. For example, it can be made to perform both vertically and horizontally, while most other types of milling machines are usually able to handle one or the other. Universal machines can manage different kinds of tasks, such as using both a table feed and an indexing head. They can also perform work that was not originally done via machine, or possibly even in the same workroom, such as filing.

CNC is the most versatile milling machine which is control by a computer.

It is an upgraded version of the bed type mill machine, in which the spindle can move in all three directions and the table can rotate 360 degrees.

These all movement is hydraulically controlled which is commanded by a computer.

In this, any difficult geometry can make on it. 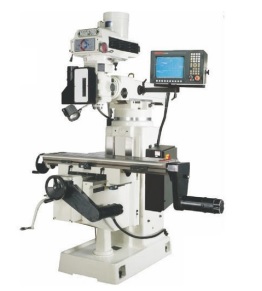 For general shop work, the most used type of milling machine is the column and knee type machine.where the table is mounted on the knee-casting which in turn is mounted on the vertical slides of the main column. 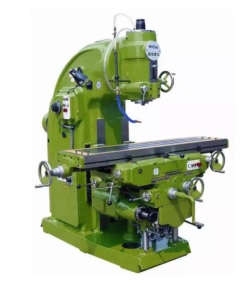 The knee vertical adjustable on the column so that the table can be moved up and down to accommodate work of various heights.


In this type of machine, the bed of the machine is fixed to the machine.
There is no arrangement of the knee and saddle which can move verticallyand transversally.
The worktable is directly situated at the fixed bed.
The spindle of this machine is mounted on a movable spindle head.


It can move in the vertical and horizontal direction and to perform the cuttingoperation. 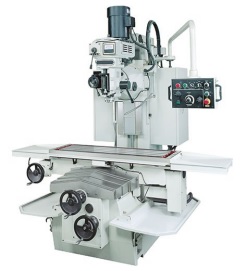 These types of milling machines are also called as “Plano-Miller”. It is a massive machine used for heavy-duty work having spindle heads adjustable in the vertical and transverse direction. 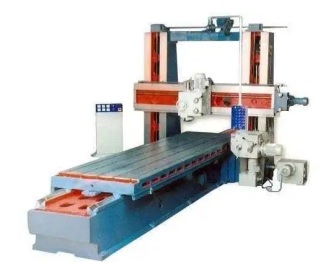 It relates to a planer and like a planing machine. This machine has a cross rail capable of being raised or lowered carrying the cutters. It has their heads, and the saddles, all supported by rigid uprights.

This arrangement of driving multiple cutter spindles enables a number of work surfaces to be machined. Thereby it obtains a great reduction in production time.

In the Triplex milling machine, the spindle can move all in three directions along X,Y, and Z-axis. 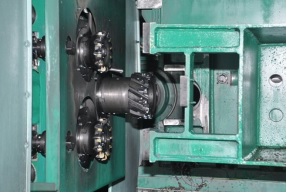 The tracer controlled milling machine reproduces irregular or complex shapes of dies, molds by synchronized (matched) movements of the cutter and trace elements. 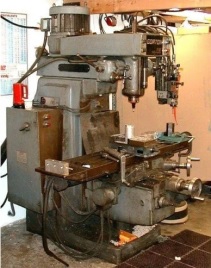