10 practical guides of lathe processing summarized by an old turner

Workpiece calibration, also known as alignment, is a method of checking whether the installation of the workpiece is in the correct position before turning the workpiece. For the purpose of calibration, the rough turning is to ensure that the workpiece margin is basically the same; when semi-finishing and finishing, it is to ensure that the relative position of the surface to be processed and the processed surface meets the requirements. Correcting quickly and correctly is an important measure to ensure product quality and shorten auxiliary time.

This correction method is fast and accurate, and can reach a certain accuracy. If the workpiece clamping is reasonable (less than 10mm), the surface of the workpiece is smooth, and the radial runout of the shaft and the end face of the disk type are generally not greater than 0.02mm.

2. The method of straightening the slender rod when doing lathe processing

The slender rod must be straightened before turning, otherwise it will cause uneven machining allowance and non-round turning, or increase the bending of the rod due to the large bending centrifuge, which cannot be turned. To straighten the slender rod on the lathe, the following methods can be used.

3) Use the counterattack method. When the slender rod is long and the diameter is relatively large, drill the center holes at both ends first, and use the spindle center and the lathe tailstock center to jack it up. Then, rotate the workpiece by hand to find the high point on the workpiece and draw a mark with chalk. At this time, use a piece of iron about 25mm thick and 40mm wide that is wider and longer than the large rail of the lathe or a relatively large wooden block. Place it horizontally on the large rail, and place a head with a V-shaped or not 60° pointed shape on it. The concave-arc-shaped thread jack is supported at the high point of the work piece's flexure and slightly supported. The left hand holds the work piece and the right hand hits the low point of the work piece with the round head of the hammer. The number of strikes, the strength and the length of the workpiece are proportional to the size of the bend. Workpieces straightened in this way are not easy to recover from bending. 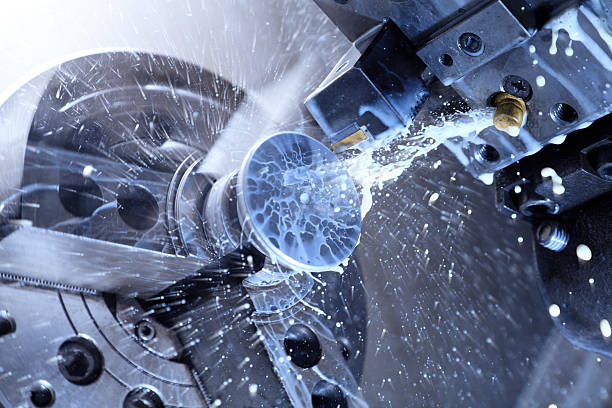 In order to process the inner hole of this workpiece, first make an inner hole turning tool. The material of the blade 2 is tool steel or alloy tool steel, and the quenching is HRC (60-62). Production method: first turn a knife blank on the lathe, heat-treat and quench, grind both end faces, install with the inner hole of the blade and the mandrel, grind the outer circle and the back angle to the requirements in the cylindrical grinding or tool grinding, and then remove the excess according to the shape of the blade Partly worn away to prevent the back side of the hole from being obstructed and unable to be turned. Then fix the blade to the arbor with screws, so that the rake face of the blade is close to the center of the arbor, so as not to hinder the lower part of the arbor, so that the cross-section of the arbor can be larger, which is helpful to improve the rigidity of the arbor.

The so-called plane thread is the thread processed on the end face of the cylinder or disc. The trajectory of the turning tool relative to the workpiece is an Archimedes spiral, which is different from the commonly processed cylindrical thread.

When the thread pitch of the workpiece is not strict, the pitch of the plane thread of the workpiece can be divided by the multiple of the increase of the thread pitch of the lathe (such as C620-1 lathe can be increased by 2, 8, 32 times), using the obtained quotient, select the lathe nameplate to approximate The amount of lateral feed, and pull the tool box handle as required, then turn the increased pitch handle on the spindle box to the increased pitch position, and the variable speed handle on the spindle box to the required position, install the tool , You can turn flat threads.

Example: The thread pitch P of the workpiece is 8mm, the measured pitch P is 8.24mm, and the number of teeth of the lathe hanging wheel is determined.

Solution 1 Use the calculation method:

Solution 2 Use the table lookup method:

When turning, it is best to use an elastic cutter bar. The geometric parameters of the cutter head are the same as those of the cylindrical thread. However, the auxiliary clearance angle on the inner circle side of the cutter head must be ground with a double clearance angle to prevent this part from hindering the turning. Use the lathe spindle to turn the tool forward and backward and return the tool. There are two ways to eat the knife: one is to use the lathe small knife holder to eat the knife and return the knife, and the small dial is counted; the second is to install the magnetic table frame and dial indicator on the large rail in front of the large carriage to control the large The position of the carriage and the amount of knife eating, and use the large carriage to eat and withdraw the knife.

In the process of turning flat threads, in addition to the square thread, turning other thread threads also needs to be “cuttered” like turning cylindrical threads to refine both sides of the thread.

5. What is the knack for sharpening knives, how to sharpen high speed steel trapezoidal thread turning tools?

Thread turning is mostly more hands-on, and learn more from the teacher, so that progress can be made fast.

The thread is a continuous protrusion with a prescribed tooth shape formed along the spiral line on the surface of a cylinder or cone. The thread is widely used in various machines. For example, four screws are used to clamp the lathe on the lathe square tool holder, and the thread is used to transmit power between the lathe screw and the opening and closing nut.

There are many methods for processing threads, and the threading method (one of the basic skills of lathe workers) is usually used in general machining. When processing threads on a horizontal lathe, the movement relationship between the workpiece and the tool must be ensured, that is, the tool moves evenly one pitch (or lead) for each revolution of the spindle (workpiece revolution).

Their movement relationship is ensured as follows: the spindle drives the workpieces to rotate together, and the movement of the spindle is transmitted to the feed box through the hanger box, and then to the lead screw after the gear box is changed in speed. The opening and closing nut cooperates to drive the tool holder and the turning tool to move linearly. In this way, the rotation of the workpiece and the movement of the tool are achieved by the driving of the main shaft, thereby ensuring the strict movement relationship between the workpiece and the tool. When actually turning the thread, due to various reasons, the movement between the spindle and the tool causes a problem in a certain link, which causes a problem when turning the thread and affects normal production. It should be resolved in time. 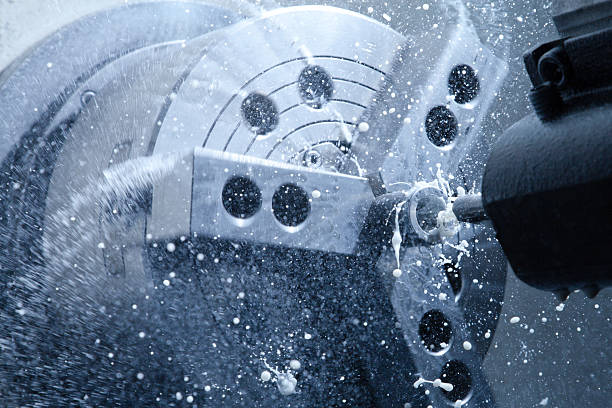 1) The tip angle is incorrect

2) The radial rake angle is not corrected

In the formula, εr is the angle between the two edges of the turning tool; rp is the radial rake angle; α is the tooth shape angle.

After the cutter is worn, it is not sharpened in time, resulting in a curved or "rotten tooth" on both sides of the processed tooth angle instead of a straight line. Solution: Reasonably choose the cutting amount, and sharpen in time when the turning tool is worn.

The reason for the large surface roughness value: one is that the tool tip generates a built-up edge; the second is that the tool shank is not rigid enough to generate vibration during cutting; the third is that the radial rake angle of the turning tool is too large, and the middle slide screw nut gap is too large to cause tie Knife; Fourth, when the high-speed steel is cutting the thread, the cutting thickness is too small or the chips are discharged in the oblique direction, and the surface of the flank has been processed; the fifth is the poor rigidity of the workpiece and the cutting amount is too large; the sixth is the rough surface of the turning tool.

3) Reduce the radial rake angle of the turning tool and adjust the screw nut of the middle slide plate to make the gap as small as possible.

4) When high-speed steel cuts the thread, the chip thickness of the last knife is generally greater than 0.1mm, and the chip is discharged along the vertical axis to prevent the chip from contacting the processed surface.

5) Choose a reasonable amount of cutting.

Sixth, the surface roughness of the cutting edge of the tool is 2 to 3 grades lower than the roughness of the threaded surface. The grinding wheel must be ground with oil stone after the turning tool is ground.

Commonly used methods to prevent tooth turmoil are to turn the car backwards at the end, that is, at the end of a stroke, without lifting the opening and closing nut, after the knife is withdrawn in the radial direction, the spindle is reversed, the turning tool is retracted in the longitudinal direction, and then the second The second stroke, in this reciprocating process, because the transmission between the main shaft, the screw and the tool holder has not been separated, the turning tool is always in the original spiral groove, and there will be no messy teeth. Secondly, when the longitudinal stroke of the feed is completed, lift the opening and closing nut to disengage from the transmission chain, and the position of the tip of the knife will be displaced.

1) When installing the turning tool, the tool tip should be aligned with the center of the workpiece, or slightly higher.

2) Reduce the front angle of the turning tool, reduce the radial force, and adjust the clearance of the lead screw in the middle slide.

In short, the types of failures generated when turning threads are diverse, including equipment reasons, tools, measurements, operations and other reasons. When troubleshooting, you need to analyze the specific circumstances and find out the specifics through various detection methods and diagnostic methods. Effective factors and adopt effective and reasonable solutions.