The cast iron is widely used in the manufacturing industry, metallurgy, etc.. 40%-60% parts are manufactured by using a casting method in the agricultural machine industry, 50%-70% in
automobile or tractor industry. 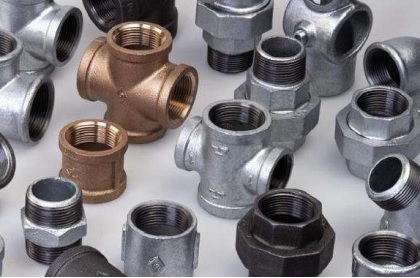 
From the iron-carbon equilibrium diagram, it can be observed that cast irons have essentially cementite and ferrite. Because of the large percentage of carbon, the amount of cementite is
high, resulting in very high hardness and brittleness for cast iron. Cast iron has lower strength,
plasticity, and toughness than steel. But cast iron exhibit properties make it a valuable metal
industrially. Its outstanding properties are the followings:


A reexamination of the iron-iron carbide phase diagram reveals that alloys within this composition range become completely liquid at temperatures between approximately 1150 and 1300℃(2100 and 2350 ℉), which is considerably lower than that of steels. Thus, they are easily
melted and amenable to casting. Furthermore, some cast irons are very brittle, and casting is the most convenient fabrication technique.

Cementite(Fe3C)is a metastable compound, and under some circumstances it can be made to
dissociate or decompose to form ferrite and graphite, according to the reaction:


Thus, the true equilibrium diagram for iron and carbon presented in Table 1. In the iron-carbon
equilibrium diagram shown in Table 1, the dashed lines indicate the formation of graphite (stable system) while the solid lines denote the metastable state in which cementite is formed. The two diagrams are virtually identical on the iron-rich side(e.g., eutectic and eutectoid temperatures for the Fe-Fe3C system are 1148 and 727 ℃ respectively, while 1154 and 738 ℃ for Fe-C); however, Fe3C system extends to 100 wt% carbon such that graphite is the carbon-rich phase, instead of cementite at 6.7% wt% C. 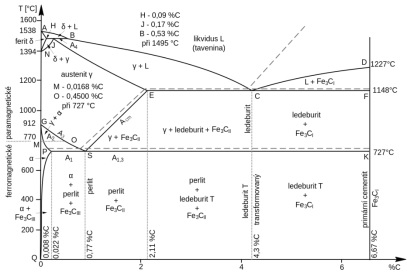 When cast iron is slowly cooled, the cementite decomposes into iron and carbon in the form of graphite, which is called graphitization.


Eutectic graphite precipitates along the line E'C'F' (graphitic system) while excess (secondary)and eutectoid graphite are formed along the lines S'E' and P'S'K', respectively.


This tendency to form graphite is regulated by the composition and rate of cooling. Graphite formation is promoted by the presence of silicon in concentrations, which is greater than about 1wt%. Also, slower cooling rates during solidification favor graphitization (the formation of graphite). For most cast irons, the carbon exists as graphite, and both microstructure and mechanical behavior depend on composition and heat treatment.


b.the second stage(temperature below eutectoid point)
The graphitizing process which is carried out at or below the eutectic point is considered the second graphitizing stage. It includes primary graphite which is formed in eutectoid transformation, graphite dispersed from eutectoid cementite, and from ferrite.

The most common cast iron types are gray, white, and mottled cast iron, as shown in Table 2 below.

The usual microstructure of gray iron is a matrix of pearlite (pearlite+ferrite or ferrite) with graphite (flakes dispersed throughout). Foundry practice can be varied so that nucleation and growth of graphite flakes occur in a pattern that enhances the desired properties. The amount, size, and distribution of graphite are important.


Cooling that is too rapid may produce so-called chilled iron, in which the excess carbon is found in the form of massive-carbides. Cooling at intermediate rates can produce mottled iron, in which carbon is present in the form of both primary cementite (iron carbide) and graphite. Very slow cooling of irons that contain large percentages silicon and carbon is likely to produce considerable ferrite and pearlite throughout the matrix, together with coarse graphite flakes.

Cast iron where a large percentage of cementite is decomposed by graphitization is called grey cast iron. 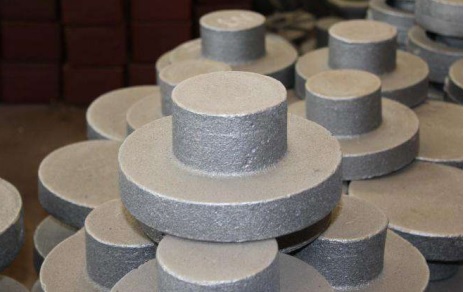 The graphitizing process in this kind of cast iron could be carried out thoroughly and most of carbon are exist in the form of graphite. Because of these graphite flakes, a fractured surface takes on a gray appearance, hence its name. The production process of normal cast iron is simple and it has good casting property. Most cast irons (more than 80%) used in industry belong to this type.

Cast iron in which graphitization has not take place, i.e. all the carbon is in the combined form, is called white cast iron. White cast iron is comparable in properties with that of high carbon steel. However, it is highly brittle and is not used for structural parts.

The goal of the metallurgist is to design a process that will produce a structure that yield the expected mechanical properties. This requires knowledge of the structure-properties correlation fo the particular alloy under consideration as well as of the factors affect the structure.


When discussing the metallurgy of cast iron, the main factors of influence on the structure the one needs to address are:
(1) Chemical composition;
(2) Cooling rate;
(3) Liquid treatment;
(4) Heat treatment.